Unbrainwashable (counts as a fusion trait; Kewne cannot be absorbed)

Kewne (キューン Kyūn) is the very first monster Koh acquires in both versions of Azure Dreams and for all intents and purposes, a one-of-a-kind monster. Kewne joins Koh's cause as his familiar when he arrives at the entrance to the Monster Tower for the first time.

Kewne is the first familiar to join Koh and is the only familiar required to progress. For a starter familiar, Kewne performs decently well. During the beginning portions of the game where Water Genus monsters appear in abundance, Kewne will struggle due to his disadvantage of being a Fire Genus monster. In order to avoid having Kewne be defeated, the player may want to take advantage of the spell Brid he comes with. Having Koh tank hits from enemies and having Kewne strengthen his attacks using mixture magic is generally a decent idea for the first 10 floors until Kewne is either strong enough to perform on his own or Koh is able to handle the enemies by himself. In the long run, should the player decide to raise Kewne, he will have decent attack without the use of stat boosting items, but may have trouble taking a lot of hits from late game monsters, such as Dragons, Maximums, and Glaciers.

Kewne possesses a Trait that makes him immune to being brainwashed by Blumes.

Due to being a plot essential character, Kewne will always come out on top of fusion no matter what, even if the other familiar has things like Leva fruit in effect.

Kewne is labeled as Monster #01

A Kewne is a dragon which was popular several hundred years ago for personal protection. However, it became extinct due to it's poor reproductive ability. The name comes from their cry that sounds like "Kewne".

Kewne is labeled as Monster #000 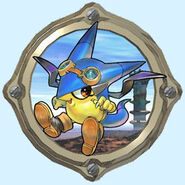 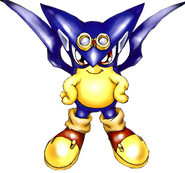 Kewne in Mitsumete Knight R.
Add a photo to this gallery
Retrieved from "https://azure-dreams.fandom.com/wiki/Kewne?oldid=5434"
Community content is available under CC-BY-SA unless otherwise noted.